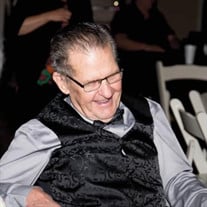 CT Chappell, 92, of Memphis passed away on Wednesday, January 12, 2022, in Memphis, TX. Funeral services are scheduled for 10:00 AM Saturday, January 15, 2022, at the Memphis Church of Christ with Jim Dixon, officiating. For the protection of the family and their friends, the family requests masks be considered. Burial will follow with military honors at Fairview Cemetery with graveside services held in the cemetery chapel. Viewing will be held at the funeral home on Friday, January 14th from 1:00 - 6:00 PM with family receiving friends from 4:00 - 6:00 PM. Arrangements are by Robertson Funeral Directors of Memphis. Colbert Taylor “CT” Chappell was born on March 29, 1929, in Plaska, TX, to James William and Judson “Juddie” Calvinia (Taylor) Chappell. CT is a lifelong resident of Hall County. He served his country as a member of the Air Force. CT was a skilled electrician with over 60 years of experience. He married Anne Lorean Young on June 19, 1953. They were married for over 68 years. CT was a longtime member of Memphis Church of Christ, and he and Anne served the community as members of the Fairview Cemetery Association. They were heavily involved in the creation of the cemetery chapel. He also was committed to acts of service and delivered Meals on Wheels for many years after retiring from West Texas Utilities. CT enjoyed his children and grandchildren, fishing, tinkering around fixing things, and traveling in the RV. He and Anne enjoyed their many travels together, and they spent a great deal of time discovering family genealogy across the country. CT deeply loved their dogs, and he was known as a family man who enjoyed spending time with all of his loved ones. He is preceded in death by his parents; his two brothers, James Chappell and Alfred Chappell; and two of his sisters, Margie Trahan and Christine Galloway. CT is survived by his wife, Anne Chappell of Memphis; his two sons, Michael Chappell, and spouse, Ed Risner, of Carrollton, TX, and Phillip Chappell and wife, Shelly, of Albuquerque, NM; his six grandchildren, Margret Chappell, Emma Coppala, and husband, Ed, Melinda Chappell, Stephanie Chappell, Erica Percifull, and Joshua Chappell; his five great-grandchildren: Elijah Chappell, Alyssa Martinez and Madison Matatall, and Jade Percifull and Kylie Percifull; his two sisters, Hope Galloway, and Virginia Saban, and husband Bill; as well as many nieces, nephews, and extended family.

CT Chappell, 92, of Memphis passed away on Wednesday, January 12, 2022, in Memphis, TX. Funeral services are scheduled for 10:00 AM Saturday, January 15, 2022, at the Memphis Church of Christ with Jim Dixon, officiating. For the protection... View Obituary & Service Information

The family of CT Chappell created this Life Tributes page to make it easy to share your memories.

CT Chappell, 92, of Memphis passed away on Wednesday, January...

Send flowers to the Chappell family.