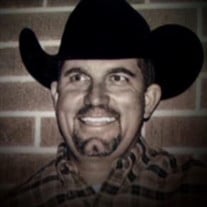 Craig Howard Cobb Fabricating heaven since July 28th, 2021 Craig Howard Cobb passed away peacefully at his home in Clarendon Texas on July 28th, 2021 at age 52. He was born on March 16th, 1969 in Portales New Mexico by Father Ricky Cobb and Mother Janice Bennett. He was a loving and kind husband, father, son and friend. Craig was married to the love of his life, Julie Cobb in Clarendon Texas. He has two children, Sade and Trevor and a stepson Joseph. He graduated high school in Portales New Mexico. Craig was a long time resident of Clarendon Texas. This man, this welder, shield in place welded with precision to produce a handsome striking gentleman with the kind of voice that was as unique as the rest of him. He spent over half his life striking an arc. He was a master Craftsman who single-handedly built his world while raising his kids. He spent most his career working at plants and on natural gas units throughout the panhandle. While welding projects for himself or others after hours. Craig had a loving passion for square body trucks, his shop that he built from the ground up, and his Lincoln welding machines. Lincoln's were his status quo. Even though he told me Miller's actually welded pretty good.. though he wouldn't be caught with one on his rig! He loved riding his Harley that he also built from the ground up. Craig had many hats depending on the occasion; a cowboy hat that he made sure was the right one for the season, a baseball cap that you never wash and a welding cap with lizards on it. While always having a can of Copenhagen Silver Top in his back left pocket. Some may not know but legend has it that he was a bull rider. Just long enough to have a picture taken. He also has Cherokee in him. He loved getting dirty and cleaning up. At the end of his day he loved sitting in his old metal rocking chair looking out the bay door of his shop visiting with anyone that wanted to stop by with his 80:s music in the background. We were blessed to learn valuable lessons from Craig to name a few; Don't go ahead and do something if you don't know how to do it, Check your measurements twice, Don't let your fuel go under a quarter of a tank, Have an air gauge with you so you don't blow up your tire, Finally, always wear eye protection. That was his biggest one. While driving If he saw someone weed whacking without eye protection he'd stop and give them a pair of his safety glasses. He did that all the time. A favorite pastime he had as a kid was at his Grandpa's shop, sitting on top of the Coke machine with a glass bottle Coca-Cola and a handful of peanuts poured in it. Him and his grandpa would sit out there enjoying it together. We would still do it. Hop in an old truck and Cruise with our glass bottle Coca-Cola and peanuts. Craig is survived by his wife Julie Cobb, his children Sade Cobb and Trevor Cobb, and stepson Joseph Russell. His parents Ricky Cobb and Janice Bennett, Janice's Husband Danny Bennett. A half brother Tyler Cobb, Aunt's, Uncle's, Cousins and Friends. He is preceded by both sets of grandparents that made a big impact on his life. To Kindred Hospice I want to Express gratitude to the people in your organization for the compassionate remarkable wonderful care given to my husband and me. Craig loved y'all from the get-go. Your time, work and effort has been very much appreciated Thank you. God Bless you. Private services per Craig's request will be held at a later date. Cremation & Arrangements are by Robertson Funeral Directors of Clarendon.

The family of Craig Howard Cobb created this Life Tributes page to make it easy to share your memories.

Send flowers to the Cobb family.