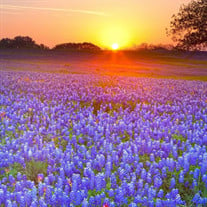 Cora Lee (Cozy) Parson, 86, passed away on November 6, 2021 in Abilene, Texas. She was born on April 7, 1935 in Lohn, Texas to parents Rudolph and Agnes Hodges. Cozy graduated from Elida High School (Elida, New Mexico) in 1953. Cozy was a hard worker and when her children were young she drove a school bus. Later, she and her then husband Rex Faubion opened Faubion Claim Service in Clovis, New Mexico where she ran the office for many years. Several years later she became a real estate broker and opened her own realty company. On December 31, 1991, she married Gabriel Parson. In 1997, they moved to McLean, Texas and together they opened the Red River Steakhouse. Cozy had a lifelong love of music and a fine singing voice. She would often perform on stage with her band at the Red River, as well as other venues. After retirement they enjoyed many years at their ranch until Gabe’s death in 2014. Cozy then moved from the ranch to live close to family. In addition to her husband Gabe Parson, Cozy was preceded in death by her parents Rudolph and Agnes Hodges, a son Roger Faubion, a great-grandson Cai Cardwell, and sisters Dorothy McCarthy (Dar), Ila Mae Hodges (Ted), and Bettie Joan Faubion (Jo). Cozy is survived by daughter Carla Smets and husband Rob of Stephenville, Texas and son Jeff Faubion and wife Jill of Lamesa, Texas; grandchildren Lane Walsh (Heather), Corey Owens (Cody), Erin Wall (Trevor) and Dylan Davis (Scott); great-grandchildren Hazel Walsh, Carter Owens, Alden Wall, Farrah Wall, Drew Davis and one sister Billie Don (Bill) Rains. A service of remembrance will be held Wednesday, November 17, at 2:00 p.m. at Heald Methodist Church, just outside of McLean, where Cozy and Gabe were members for many years. Arrangements are under the direction of Robertson Funeral Directors in Clarendon, Texas.

Cora Lee (Cozy) Parson, 86, passed away on November 6, 2021 in Abilene, Texas. She was born on April 7, 1935 in Lohn, Texas to parents Rudolph and Agnes Hodges. Cozy graduated from Elida High School (Elida, New Mexico) in 1953. Cozy was a... View Obituary & Service Information

The family of Cora Lee "Cozy" Parson created this Life Tributes page to make it easy to share your memories.

Send flowers to the Parson family.