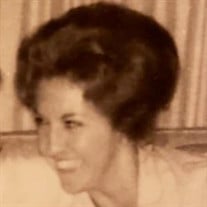 Graveside services will be held on Tuesday, April 13, 2021 at 11:00 a.m. at the Citizens Cemetery in Clarendon, Texas. On Friday, April 9, 2021, Connie Clifford, loving wife and mother of two girls, passed away at age 84. Connie was born on February 18, 1937, in Woodsboro, Texas, to E.W. and Florence Thurk. She attended Woodsboro High School and graduated in 1955. She then went on to receive her degree in Home Economics from the University of Texas in Austin in 1959. She immediately went to work for Houston Light and Power as a Home Economist/Consumer Advocate for six years. On November 10, 1961, she married Fred Clifford at the Grace Lutheran Church in Woodsboro, Texas. Connie had a passion for sewing. She even made her own wedding dress and all of her bridesmaid dresses. She loved to bake, cook and garden. She was known for her beautiful eyes and infectious smile. In 1965, Connie and Fred relocated to Clarendon, Texas, where Connie became a long-time member of the First Baptist Church and together they raised their two girls, Gayla and Trisha. Shortly after moving to Clarendon, Connie began to teach in Estelline, Texas. Connie was preceded in death by her mother, Florence, and her father, E.W. She is survived by her husband, Fred Clifford; daughter, Gayla (Chris) Reynolds of Pleasanton, Texas; daughter, Trisha Clifford of Pflugerville, Texas; her brother, Larry Thurk, of Corpus Christi, Texas; as well as five grandchildren (Megan Pope, Shelby Pope, James “Ross” Reynolds, Will Reynolds, and Ruthie Bell), and wonderful nieces and nephews, including Virginia and Brit Patten; Abby (Cole) Llewellyn; Annie (Barrett) Coon and great-great-nephews, Brecken and Bray; caretakers including, Nancey Owens, Danielle Youree and Paulette Kidd, and many other wonderful friends and neighbors. Flowers or donations are requested to be sent to church of your choice, the Clarendon Senior Citizens, or Citizens Cemetery (P.O. Box 983) in Clarendon, Texas.

Graveside services will be held on Tuesday, April 13, 2021 at 11:00 a.m. at the Citizens Cemetery in Clarendon, Texas. On Friday, April 9, 2021, Connie Clifford, loving wife and mother of two girls, passed away at age 84. Connie was born on... View Obituary & Service Information

The family of Connie Ruth Clifford created this Life Tributes page to make it easy to share your memories.

Send flowers to the Clifford family.