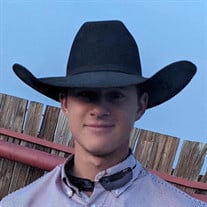 Services for Clayton Harold Anderson, 16, of Clarendon, Texas will be held 10:00 AM Monday, June 27, 2022 at the Clarendon College Matlock Rodeo Arena with Steve Friskup, officiating. Burial will follow in Citizens Cemetery in Clarendon. Viewing will be held Sunday at the funeral home. Arrangements are by Robertson Funeral Directors of Clarendon. Clayton meaning “molded by God” Job 33:4 – The spirit of God has made me and the breath of the Almighty gives me life. Clayton Harold Anderson went to his heavenly home on Sunday, June 19, 2022. Clayton will forever be remembered for his cowboy ways, and a smile that always lit up under the arena lights. Clayton was born to Kyle and Annie Anderson on July 12, 2005. Later two other brothers were added to the family, Caden Anderson in 2007, and then Chance joined the family with a complimentary birthday on July 12, 2010, to complete the C3 Cattle Company. He was well-known for his horsemanship skills in multiple states and had recently won Reserve Champion in Texas State Reined Cow Horse marking his spot in the upcoming High School National Rodeo Finals. Clayton was extremely compassionate - both humans and animals were blessed to be in his presence. He worked hard to improve his talents and help his family with their cattle and horses. In 2021, he was the first Top Hand of the Junior Working Ranch Cowboy Association showing his consistency in being a strong team player and a stand-out sportsman. Among many other winnings and awards, he still shares the record for the highest Junior High Saddle Bronc score in Texas. His greatest competitor was himself – always looking to improve. By 16 he has started over 25 colts and rode at least 40 outside horses. Clayton has touched many lives in his 16 years. With his calm and confident demeanor, he never hesitated to lend a hand, help a friend, show up for a branding, working cows, and riding whatever horse asked of him. He wasn’t boisterous or arrogant and was a great role model for his brothers. If you asked Clayton what he wanted to do when he grew up, he would tell you he wanted his own ranch with a nice stud to breed mares. He was a natural when it came to training and working horses, excelled at ranching, and knew better than most how to show up and work hard. He had a good sense of horses and cattle, when he took off after strays, he would never come up short. It seemed he excelled at everything he tried – from elementary wrestling and baseball to rodeoing and training and most of all being an amazing son and brother. If Clayton had the opportunity, he would tell us all to sit tall in our saddles, never forget your handshake and grin. In Clayton’s famous words “just do your best and try not to mess up”. He is survived and loved by his parents Kyle and Annie (Boettcher) Anderson; brothers Caden and Chance Anderson; Grandmother RoxAnn Robinson; Grandfather Bruce Boettcher; Grandparents Kent and Leanne Anderson; Great Grandparents Jim and Evadene Boettcher; Aunt Amy (Boettcher) Schaffer and cousin Emmett; Aunt Andrea (Boettcher) Hardin and cousins Ava, Lane, and Luke; Aunt and Uncle Krista (Anderson) and Jacob Spurgin. The family request memorials be sent to the Clarendon Outdoor Entertainment Association P.O. Box 61 Clarendon, Texas 79226.

The family of Clayton Harold Anderson created this Life Tributes page to make it easy to share your memories.

Send flowers to the Anderson family.