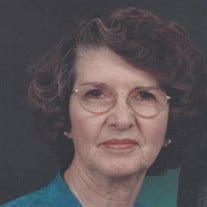 Claudia Aycock Christner, 89, of Shamrock died Friday, August 6, 2021 in Wheeler. Memorial services will be 11:00 AM Monday, August 16, 2021 in the First United Methodist Church in Shamrock. Private family inurnment will be in Shamrock Cemetery in Shamrock. Cremation & Arrangements are by Robertson Funeral Directors of Shamrock. Claudia Aycock Christner was born January 24, 1932 to Claude Aycock and Illa Mae Swift Aycock in Shamrock. She grew up in Shamrock and attended Shamrock schools and graduated in 1950. She married John Hal Christner in 1950. They lived in College Station, Florida, Pampa, and Canyon before moving back to Shamrock in 1964. She was an active member of the First United Methodist Church in Shamrock and all areas of the United Methodist Women. She helped establish the Pioneer West Museum in Shamrock and served on the board of directors. She was also a longtime member of the Thursdays Literary Club. She was preceded in death by her parents; her husband in 2018; a sister, Laverne Brooks and her husband, I.A.. Survivors include a son, Johnny Christner of Shamrock; a daughter, Jan Woodard and husband Dan of Houston; 4 grandchildren, Brian Hardin, Ashley Hardin, Cassie Small, and Reid Christner; 7 great grandchildren, Peyton, Zoe, Kensi, Kylie, Kynslee, Jaxson, and Boone. The family request memorials be sent to the Pioneer West Museum in Shamrock.

The family of Claudia Aycock Christner created this Life Tributes page to make it easy to share your memories.

Send flowers to the Christner family.