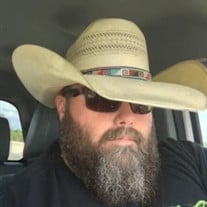 Funeral services for Choya D. Barker will be held at 10:00 AM Saturday, January 15, 2022 at the Wise Funeral Home Chapel, 219 W. Sam Rayburn Dr. Bonham, Texas. Chad McEntee will officiate along with family and friends. Burial will follow in the Dodd City Cemetery. Pallbearers will be Stoney Adams, Colton Barker, Pete Jones, Larry Dean, Chad McEntee, Victor Briseno, Clay Wilcox, Homer Barker, Josh Zachary and Rick King. Choya was born at Baylor Hospital in Dallas, Texas on July 7, 1975, to Choya Lynn Barker and Vicky Lynn (Duncan) Barker. He attended school in Rowlett, Terrell, and Garland, Texas. He grew up loving the outdoors; hunting, fishing, roping, and four wheeling. He was married to Jennifer Brenham, and they had a son, Colton Barker. He later married in 2012 to Addrein Maifield at their home in Union Valley. In October of 2020 he moved to Shamrock, Texas with Addrein and is where he was residing when he unexpectedly passed away at home on January 9, 2022. He worked in the underground utilities business following in the footsteps of both his father and uncle. He spent his life loving, living, and working fiercely. His heart and personality were both larger than life. His hobbies included roping, hunting, throwing horseshoes, and backroad riding, bar-b-queuing and storytelling. He was someone who always knew how to make an entrance and per his style, that entrance was typically late. He went by his own rules and had a vocabulary uniquely of his own. He is preceded in death by his father Choya and mother Vicky. He is survived by his stepfather Mike Phillips, wife Addrein, son Colton, and brother Coy, and numerous aunts, uncles, nieces, nephews, and cousins. He is loved by many and fiercely missed. The family will receive friends at Wise Funeral Home Chapel on Friday, January 14, 2022 from 6:00 until 8:00 PM. You may sign the online guest register at www.wisefuneralhome.com

Funeral services for Choya D. Barker will be held at 10:00 AM Saturday, January 15, 2022 at the Wise Funeral Home Chapel, 219 W. Sam Rayburn Dr. Bonham, Texas. Chad McEntee will officiate along with family and friends. Burial will follow in... View Obituary & Service Information

The family of Choya Dwayne Barker created this Life Tributes page to make it easy to share your memories.

Send flowers to the Barker family.