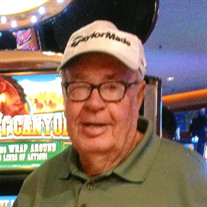 Charles Ray Davis, 87, of Howardwick died Sunday, March 15, 2020 in Howardwick. Services will be 10:00 AM Thursday, March 19, 2020 in Robertson Funeral Directors Saints' Roost Chapel in Clarendon with Rev. Jim Fox, officiating. Burial will follow in Citizens Cemetery in Clarendon. Arrangements are by Robertson Funeral Directors of Clarendon. Charles was born January 18, 1933 in Mayfield, Oklahoma to Clarence and Mary Louise Davis. He was a US Army veteran. He married Nancy Darlene Walker on July 10, 1954 in Canadian. In his younger years, he loved bull riding. Charles had been a resident of Pampa from 1956-1991, and had worked for Pampa Fire Department for 37 years where he retired as a Captain. He was a member of the Masonic Lodge and the Order of the Moose where he had served as past governor. In 1991, they had moved to Howardwick. Nancy preceded him in death in 2015. He later married Gayle Edes on May 12, 2018. He was a member of the First Baptist Church in Howardwick and attended First United Methodist Church in Clarendon. He was preceded in death by his parents; his first wife, Nancy in 2015; a daughter, Darlene Usleton in 2006; a son in law, Doug Woods; a brother, Odell Davis; a sister, Clara Huffman; a great grandchild, Brook Baldwin. Survivors include his wife, Gayle Edes Davis of Howardwick; two sons, Danny Davis and wife Julie of Amarillo and Donnie Davis of Pampa; a daughter, D'Anne Woods of Pflugerville; two brothers; five sisters; five grandchildren; and 11 great grandchildren. The family request memorials be sent to Donley County Senior Citizens, First Baptist Church of Howardwick, or First United Methodist Church of Clarendon.

The family of Charles Ray Davis created this Life Tributes page to make it easy to share your memories.