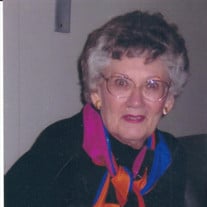 Cecil Florence Jones Davis, 101, of Shamrock, died Monday, November 29, 2021 in Shamrock. Services will be Wednesday, December 8, 2021 at 2:00 PM at the Davis Cemetery at Erick, OK with Kris Power officiating. Services are by Robertson Funeral Directors of Shamrock. Cecil was born on January 23, 1920 in Cushing, OK to Cecil George Jones and Helen Holmes Jones, long time and active residents of Stillwater, OK. Cecil attended Stillwater High School and graduated in 1938. She attended Oklahoma A & M (now Oklahoma State University) and was a member of Kappa Alpha Theta Sorority she met and married George Champion Davis, a rancher from Beckham County, OK and Wheeler County, Texas. They moved to Shamrock and George continued to ranch until his death in 1995. They raised four children and were involved with their activities from piano recitals, golf tournaments, football games and showing cattle. Cecil and George were great supporters of the many Oklahoma State University football teams. Cecil was a member of the First United Methodist Church. She was a member of Atheneum and Forum Study Clubs. She loved playing bridge and belonged to several bridge clubs. She was a member of the Daughters of American Revolution. She loved her family and they loved her. Her philosophy was to wake up every morning with a song in her heart. Her bubbly personality, friendliness, and positive attitude will be missed by many. She was preceded in death by her parents, her brother, Wesley Jones; her husband, George C. Davis; her son Champ Davis; her daughter, Cynthia Carley and her daughter-in-law Nancy Davis and great grandchildren, Charlie Kate Power and Shane Daniel. She is survived by a son, George R. Davis and wife Deanna of Oklahoma City; Mary Helen Daniel of Roanoke; son-in-law Ronald Carley of Duncan, OK; ten grandchildren, Danny Davis, Tammy Garlitz, Kevin Davis, Clinton Carley, Catherine Buckley, Neal Ray Davis, Nacy Davis-Long, Kristine Power, Brady Daniel and Kyle Daniel; Twenty-three great grandchildren. The family suggest memorials e made to the First United Methodist Church of Shamrock or the Shamrock Public Library

The family of Cecil Florence Davis created this Life Tributes page to make it easy to share your memories.