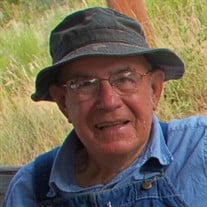 Burnis Lee Stokes, Sr., 85. Born July 9, 1935, on a farm east of McLean, TX., to Buster & Eula Faye Stokes. He passed away March 4, 2021. Services will be 2:00 PM Monday, March 8, 2021 in the First Baptist Church in Shamrock with Rev. Mark Howard, officiating. Burial will be in Shamrock Cemetery in Shamrock. Viewing will be held Sunday at the funeral home. Arrangements are by Robertson Funeral Directors of Shamrock. Burnis graduated from Shamrock High School in 1954, and married Della Mae Parson on August 7, 1954. They had four children. He owned a trucking company and was a truck driver many years before becoming a diesel mechanic until he retired. After retirement, he began a lifetime of serving within the community. He was a deacon in the Baptist Church, a Gideon, prison ministry volunteer, delivered Meals on Wheels and was eager to help anyone in need. During his retirement he began quilting and made many beautiful quilts. He enjoyed making baby quilts and donating them to the Crisis Pregnancy Center in Pampa. In 1999, he was diagnosed with Lymphoma, fought and won many battles against various cancers for 21 years at MD Anderson Cancer Center in Houston. He passed away peacefully after a brief battle against Pancreatic Center at home with his family by his side. Burnis was preceded in death by his father, mother and brother Kenneth. Two granddaughters, Sheila Buck and Kristin Wiley, and great granddaughter, Lauren Buck. He is survived by his wife of 66 years, Della Mae. Brother Gene of Round Rock, TX. Four children: Burnie Stokes and his wife, Charlissa of Amarillo, Brenda Buck and her husband, Carl of Canyon, Rebecca Wiley and her husband, Kip of Houston, and Connie Goodner and her husband, Kevin of Midland. He had 10 grandchildren: Rodney Stokes, Wendy Ganza, Chris Buck, Amber Read, April Hernandez, Jeremy Wiley, Alan Kirkland, Daniel Walters, Dustin Walters and Kelsey Walters. 28 great grandchildren and 11 great great grandchildren. In lieu of flowers, the family requests donating to Meals on Wheels in Shamrock, Crisis Pregnancy Center in Pampa or the First Baptist Church in Shamrock.

The family of Burnis Lee Stokes Sr. created this Life Tributes page to make it easy to share your memories.

Send flowers to the Stokes family.