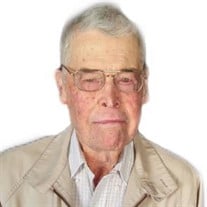 Buford Holland, 98, of Hedley died Friday, October 15, 2021 in Amarillo. Graveside services will be 2:00 PM Monday, October 18, 2021 in Rowe Cemetery in Hedley with Rev. Bruce Howard, officiating. Viewing will be held from 1:00-6:00 PM Sunday with Visitation being from 4:00-6:00 PM at the funeral home. Arrangements are by Robertson Funeral Directors of Clarendon. Buford was born May 23, 1923 in Donley County to Waymond C. and Katie Katherine Hassell Holland. He grew up in Donley County and was a graduate of Lelia Lake High School. He married the love of his life, Geraldine Patricia Foster on December 12, 1942 in Lelia Lake. Buford was a World War II veteran serving in the US Army Air Force. He had been a resident of Hedley since 1949 and was a rancher. Buford had served as a Donley County Commissioner for 12 years, served on the Lelia Lake and Hedley school boards, the Donley County Hospital District board, and the Rowe Cemetery Association board. He was a member of the American Legion, Hedley Lions Club, and the First Baptist Church in Hedley. Buford was the backbone of the Holland family and he lived life to the absolute fullest. He was preceded in death by his parents; his wife of 76 years, Geraldine in 2019; a son, Lynn Holland; and his brothers, Calvin Holland who was missing in action during World War II and Eldon Holland. He is survived by two sons, Otis Darrell Holland wife Barbara of Hedley and Glyndol Holland and wife Kathi of Amarillo; a daughter, Gail Hill and husband Johnny of Hedley; a sister, Cliftie Johnson and husband Mike of Clarendon; 9 grandchildren; and numerous great grandchildren and great great grandchildren. Buford was not a flowery type of man. He did not want to waste precious water or money on flowers. So, the family asks that you consider a memorial to one of the Hedley organizations listed below. He would be happy to know that someone benefits from your kindness. Rowe Cemetery Association / PO Box 213 / Hedley, TX 79237 or Hedley Sr. Citizens / PO Box 216 / Hedley, TX 79237.

The family of Buford Holland created this Life Tributes page to make it easy to share your memories.

Send flowers to the Holland family.