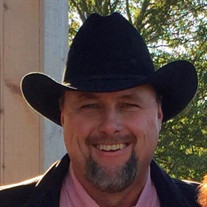 On January 8, 2021, Russell Bret White of Clarendon, Texas passed away at the age of 54. Bret will be forever missed by his wife Leslie White, his daughters Maci White and Skyler Johnston (and husband David), his parents Donald and Mary White, his brother Randy White (and wife Jana), his nieces Kristin Henderson (and husband Michael) Jenci Dorl (and husband Trent), and Janae White, 3 great nieces and a great nephew, as well as in-laws Mark, Cenee, Brice, and Briss Graham and father in-law Keith Graham and the late Brenda Driver Graham. Bret White was born in Wellington Texas on November 30, 1966 to Mary and Donald White. Bret was a faithful member of the Clarendon Church of Christ and loved the Lord. When he made the decision to put on Christ in baptism, he knew the importance and wanted to do it immediately. During his years at Clarendon High School, Bret excelled in football and track and earned multiple honors in FFA and judging. After graduating high school in 1985, he attended Clarendon College where he had a short career in bareback bronc riding, averaging 0.07 seconds per attempt. He only attempted it once. Bret stayed in Clarendon after college and was Co-owner, along with his brother Randy, of White’s Feed and Seed. Anyone who went into the “feed store” is bound to have some fond memories of Bret and know that he never met a stranger, always had time for everyone, and never failed to shake your hand or give you the best bear hug you have ever received. If you spent any time roasting peanuts at White’s Feed and Seed or leaning on the counter sipping coffee at WTG, you know Bret’s heart. Bret was very soft spoken, but katy bar the door when he got to that point. He always spoke with such wisdom and if he had something to say you better listen because he had put a lot of thought into it. He also had such a servant’s heart and was always willing to lend a helping hand. He prepared communion for 33 years and helped Leslie clean the church building, however, most of the time he could be found at the podium singing songs over the mic as Leslie strongly encouraged him to get back to work. After 27 years of working at the feed store Bret switched careers to be the district manager of West Texas Gas, covering the areas of Pampa, Claude, Clarendon, Hall County, and Wellington. He took pride in his job and loved his employees; he was so proud of their station and the kindness they showed the customers and community. Bret loved his brother Randy; they were not only siblings but best friends. Together, along with their dad, they worked the land at Quail and enjoyed working cattle, ranching, and picking at their momma. You knew Bret loved you when he picked on you. Bret also loved the Clarendon Broncos. On Friday nights he could be spotted standing near the concession stand, with his hands behind his back, watching the game and Saturday mornings eating breakfast burritos and talking play by play with the boys at the store. Bret was an avid music lover and had an eclectic taste ranging from gospel to rock to prime country. He enjoyed singing. When he was courting Leslie, he would sing to her, and over the years the most precious memories are of him singing to his family. Even in his final moments he was singing, “God be with you till we meet again” to his bride. Bret married his beautiful bride, Leslie Graham on August 22, 1987 and together they had two precious girls, Maci and Skyler. If you ever talked to Bret you knew how proud he was of his girls. The thing he enjoyed most in life was being a daddy and husband. He was also the very best Uncle B to his nieces, but the name he was most excited to carry was that of B-Paw and he couldn’t wait to meet his first grandchild this summer. I like to think B-Paw is already playing ball with his grandson. -My tribute to you Uncle B, love Kristin A graveside service will be held at 11am on Wednesday, January 13, 2021 at the Quail Cemetery 4156 FM 1547 Quail, Tx 79251. At the caution light turn left, and the cemetery is one mile north on the right. The family wishes to send a special thank you to the staff at the Clarendon Ambulance Association for their care and compassion. If you feel led to give in Memory of Bret, please make a contribution to the Clarendon Ambulance Association PO Box 1240 Clarendon, Texas 79226.

On January 8, 2021, Russell Bret White of Clarendon, Texas passed away at the age of 54. Bret will be forever missed by his wife Leslie White, his daughters Maci White and Skyler Johnston (and husband David), his parents Donald and Mary White,... View Obituary & Service Information

The family of Bret White created this Life Tributes page to make it easy to share your memories.

Send flowers to the White family.