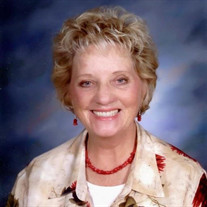 Brenda Kay, McAnear Barrett passed from this life at 4:47 P. M. on Tuesday, April 21, 2020, at the age of 75 Years, and 5 months, and 6 days. She had been battling a lengthy illness, to which she finally succumbed. She is survived by Her Husband of 57 years, Jerry Wayne Barrett, of Canyon, , three sons, Jay Barrett and his wife Pam, , Brian Barrett and his girlfriend, Julie Smith, , and Chris Barrett and his wife, Christie, , `six Grandchildren, Kristen Flowers and Her Husband, Darren, Benjamin Barrett, Parker Barrett, and his wife, Kendra, Jeron Barrett, , Trey Barrett, and, Payton Burkhart, and his wife Victoria. Five Great Grandchildren, Leah Ji''an Flowers and her brother Koen Shade Flowers, and Eli Burkhart and Augustina Burkhart, and Hayden Burkhart, all of whom were the light of her life Three Sisters. (Four, actually). Judy Monk and her husband Bill, , Debe Land, and her husband Steve, and Sheliah Babbitt, and her sister-in-law (and In-LOVE), Mrs. Jimmy Dean McAnear, (“Patty”), and a hosts of Nieces and Nephews, Cousins and many, many friends., especially three, Rebecca Sotelo, and Jessica Bristol, and, especially, Ms. Vicki Ward.. Friends and Family were a major component of her character. She often hosted Summer Holiday cookouts with many as 50 persons in attendance. She is preceded in death by her Father and Mother, Sellkirk and Lorene McAnear, her Sister, Barbara. and her husband, Ralph Harmon, and two brothers, Jimmy Dean McAnear, and Cody McAnear. Brenda was born in the Adair Hospital in Clarendon, Texas on November 15, 1944. She began her education in the Elementary School at Goodnight, before transferring to Clarendon. In 1963, she was voted “Class Favorite”. (And, she was that: “Class”, and a Favorite!) Over the course of her life, she lived in Clarendon, Shamrock, and, Plainview, Texas, Hardesty, and Texhoma, Oklahoma, before settling in Canyon, where she has lived the last 47 years. First, a Pastor’s 'Wife, mother, and homemaker, she began her career working outside the home as a clerk in Simpson's Western Auto in Texhoma, Oklahoma. When the family moved to Canyon, she retired,…...for three days and then took a job with Energas, (then Pioneer Natural Gas), where she worked until she was able to take an early retirement. She next worked as a Secretary, at Mesa Verde Elementary in Amarillo, where she worked another decade retiring permanently. She dearly loved all the kids and was beloved by them, as well. Active in Politics, was elected President of the Potter/Randall Democratic Club, and State Democratic Executive Committeewoman fir the 31’st Senatorial District. In the latter role, she was active in the campaigns that led to the election of the first Hispanic to a Statewide Office, Justice Raul Gonzales, and also Attorney General Danny Morales It was her support, at the historic Driskill Hotel in Austin, that enabled an Amarillo man, the Honorable Morris L. Overstreet, to have his name placed on the ballot, becoming the first African-American man elected to a Statewide Office. She was also active in the campaigns of the Senatorial bid of Congressman Lloyd Doggett of Austin, Governor Ann Richards, State Comptroller John Sharp, Potter County Judge, Elisha Demerson, and County Judge Lewis C. Brazier. She was proud to have helped a Boys Ranch Graduate, Bill Sarpalius be elected to the Office of U. S. Congressman. As Committeewoman, she received an invitation to the Inauguration of President Bill Clinton. In Washington, she stayed in the home of one of her Energas Trainees, Ms. Elva Hippolito, now of Plainview She has had an active life and brought joy and laughter to all those she encountered. She was greatly beloved and will be greatly missed. The Viewing will be Friday 9:00 am-4:00 pm & Saturday 12:00-3:00 pm at Robertson Funeral Directors in Clarendon. Due to COVID, Only 5 people are allowed at a time. Please join the family celebrating her life with a Service at the Clarendon Sandell Drive-in at 8 pm Saturday evening. You will be asked to stay in your car and there are no restrooms. The family requests all donations be mailed to Clarendon Junior College, Brenda Kay Barrett Memorial Scholarship Fund, PO Box 968, Clarendon, TX 79226.

Brenda Kay, McAnear Barrett passed from this life at 4:47 P. M. on Tuesday, April 21, 2020, at the age of 75 Years, and 5 months, and 6 days. She had been battling a lengthy illness, to which she finally succumbed. She is survived by Her Husband... View Obituary & Service Information

The family of Brenda Kay Barrett created this Life Tributes page to make it easy to share your memories.

Send flowers to the Barrett family.