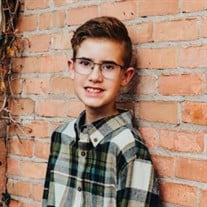 Brandon Gene Lewis, 12, of Amarillo and Shamrock died Sunday, March 6, 2022 in Carson County. Services will be 10:00 AM Thursday, March 10, 2022 in the First Baptist Church in Shamrock with Rev. Mark Howard, officiating. Burial will follow in Shamrock Cemetery in Shamrock. Arrangements are by Robertson Funeral Directors of Shamrock. Brandon was born July 14, 2009 in Amarillo to Sandy Russell and Jeremy Lewis. He had been a longtime resident of Shamrock before moving to Amarillo last year where he was a 6th grader at Pinnacle Intermediate School at Canyon ISD. He was in the Choir and just recently brought home an award for his performance. Brandon was a jokester just like his dad and loved telling jokes. He also loved music, singing karaoke, playing video games, and watching TikTok videos. He enjoyed playing with his friends and cousins. He will be deeply missed by all. He was preceded in death by his maternal grandfather, Dan Carter; his paternal grandfather, Darrell Lewis, his great grandparents, Joyce Horne, James Conner, Dewey and Dorothy Lewis, Lawrence Russell, and Gene Christian.. He was accompanied in death by his dad, Jeremy Lewis and his brother, Benjamin Lewis. Survivors include his his mother, Sandy Russell of Amarillo; his bonus mom, Sandy Lewis of Shamrock; his maternal grandparents, Judy Christian of Utah, Bennie Bullock of Shamrock, and Carol Carter of Amarillo; his paternal grandparents, Jeannie and Steve Lucas of Shamrock; his paternal great grandmother, Maysie Conner of Shamrock; his sister, Emily Russell of Amarillo; his brother, Evan Thomas of Shamrock; his aunts and uncles, Misty and Shane Everett, Brandon and JoAnn Lewis, Sasha and Ryan Davis, Shelly Lucas, Josh and Alisha Lucas, Larry Russell, Alan Bullock, Michael Bullock, Amanda and Christina Harris, Kenny Harris, Lindsey Russell, and Russell and Meredith Carter; his cousins and best friends, Caroline and Eleanor Harris; and numerous cousins and extended family. . The family request memorials be sent to the First Baptist Church of Shamrock Youth Program or Muscular Dystrophy Association..

The family of Brandon Gene Lewis created this Life Tributes page to make it easy to share your memories.