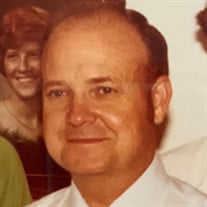 Bobby Leon Wills of Mansfield, Tx passed away Friday, July 17th, 2020. Bob was born Dec. 20, 1928 to H.O. and Delcie Ina Wills in Snyder, Tx. He was the youngest of four children and remained close to his beloved sisters, Hazel Gibson and Ruby Nell Cook and brother Millard Wills. After graduating from Athens HS at the age of 17, he immediately enlisted in the United States Navy. He was a veteran of World War II and the Korean Conflict. Upon leaving the Navy, he played football and received his associate’s degree from Henderson County Junior College. He then earned his bachelor’s degree while continuing to play football at West Texas State University. Bob went on to earn his Masters of Education from WTSU in 1956. He began his career in education in Flomont, Tx as the head football coach and social studies teacher. He held the same position in Hartley, Bovina and New Deal where he was also head basketball, baseball, and track coach. While coaching at Hartley, he met the person he would build the rest of his life with, Evangeline Stinson. They were married April 8, 1955. His first job as an administrator was as the high school principal his last two years at New Deal. He moved the family next to Morse where he also coached all sports and was the superintendent. Bob and Evangeline both retired from education in 1987 in Wheeler after he spent 15 years serving as the high school principal. All of his 37 years as an educator were spent at small schools in the Texas Panhandle where he wore many hats – coached every sport (boys and girls), drove the athletic and regular route buses, served as the county tax assessor at one town, high school principal and superintendent. He treasured his time spent teaching/coaching at each of these small towns believing that you were able to make more of a difference and truly become a part of the community when you had a chance to get to know not only his students/players but their families as well. His athletic teams won several district and regional championships in all sports and he coached several state track competitors and champions along with state appearances in football and basketball. He remained passionate about the importance of education and also the role athletics can play in children’s lives until his death. Bob and Evangeline were both very involved in the community especially in Wheeler having lived over 40 years there. They were members of the First Baptist Church and especially enjoyed the work and fellowship of the mission trips of which they were a part. They were both Sunday School teachers for many years. Bob was a Scoutmaster for the Boy Scouts for over 20 years. He and Evangeline helped start the Meals on Wheels program and volunteered their time with this organization until their move to Mansfield. He loved being a member of the Lions Club for over 60 years and participating in all of their activities helping the community. Bob along with his wife, Evangeline, lived a life of service to others. Family was the main focus of his life and of utmost importance to him. He was a very giving man and willing to help any one in need. He will be greatly missed by his family and many friends. Bob was preceded in death by his parents, his sister Hazel, his brother Millard and his wife of 60 years, Evangeline. Those left to cherish his memory are his children: sons Robert Wills and wife, Lisa, of Odessa, Tx, Wade Wills of Spring, Tx and daughter, Beth Wills and Krissi of Mansfield, Tx; grandchildren Sara and husband Mitchel Davis, Andrew, Paxton and Paige Wills. Great-grandchildren Austin, Wrenlee and Oakley Wills; sister, Ruby Nell Cook, family friend Janice Richards; numerous and much loved nieces and nephews, Mary Ellen, Tommy, Jim and Debbie, Charlotte, Price, Chris, Rena and Mark and many friends. Viewing: 9:00-4:00 Wednesday, July 22nd at Robertson Funeral Directors in Wheeler, Tx Service: 10:00 am Thurs, July 23rd at Seeger-Myatt Funeral Home with interment afterwards at Laverne Cemetary in Laverne, OK. Arrangements are by Seeger-Myatt Funeral Home of Laverne, Oklahoma. In lieu of flowers, family request memorials be sent to the Wheeler Lions Club.

The family of Bobby Leon Wills created this Life Tributes page to make it easy to share your memories.

Send flowers to the Wills family.