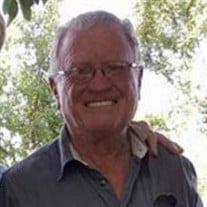 Bobby Jack Weatherly, 85, passed away on Sunday, March 22, 2020, at his home South of Wheeler. Graveside Services will be held at 11:00 am Thursday, March 26, 2020 at Wheeler Cemetery with Erron Mercer and Rodney Weatherly officiating. Arrangements are by Robertson Funeral Directors of Wheeler. He was born May 7, 1934 out on the family farm east of Wheeler to Weldon O’Dell Weatherly and Grace House Weatherly. Bob graduated from Wheeler High School in 1952, joined the R.O.T.C. and went on to graduate from West Texas State in Canyon. He also served in the US Army during the Korean War while stationed at Ft. Bliss in El Paso as an Artillery Specialist. In 1961 he married Delores Mullins, and from this union they had three children, Stacy, Quincy and Rodney. While living in Happy, Texas he worked at the Case House while training in Tulia and then later at Clarendon at the ASCS office. He lived in Hartley and Pecos eventually moving to Wellington working as the head of the ASCS office until his retirement. He returned to his hometown of Wheeler and worked as a cattle buyer for Heritage Beef Cattle. On December 20, 2003 he married Glenda Foote McCasland and they have made their home in Wheeler for the past 16 years where Bob has been active in the cattle business. Bob was loved and known by his grandkids as PaPaw, PaPa and Bob O. He had a generous heart for others and loved people. He is loved and missed by many family and friends. He also had a love for cattle, old cars and a good business deal. He is preceded in death by his parents; son, Rodney Weatherly; sister, Peggy Ford and brother, Cloys Weatherly. Survivors include his wife, Glenda Weatherly of the home; daughters, Stacy Hood and husband Joel of Jacksboro, Texas, Lindsey McCasland Thiessen and husband Kent of Elk City, Oklahoma; sons, Quincy Weatherly and wife Cindy of Wellington, Texas, Lee McCasland and wife Amy of Edmond, Oklahoma, Layne McCasland and wife Taylor of Leesville, Texas; grandkids, Jacie Hood of Dallas, Texas, Alyssa Erwin and husband Matthew of Decatur, Texas, Koby Hood of Denton, Texas, Karson Hood of Lubbock, Texas, Joshua Weatherly of Wellington, Texas, Jacob Weatherly and wife Alisha of Wellington, Texas, Monty McCasland of Dallas, Texas, Madison McCasland of Lubbock, Texas, Tyler Thiessen and wife Payton of Elk City, Oklahoma, Travis Thiessen and wife Nicole of Elk City, Oklahoma, Chance and Brody Thiessen of Elk City, Oklahoma; great grand kids, Cooper and Savana Erwin, Quade and Barrett Weatherly, Haven Thiessen, Taytum, Taylee, Taygan Thiessen. In lieu of flowers, donations can be made to North Wheeler County Ambulance 201 East 7th Street Wheeler, Tx. 79096 High Plains Children’s Home P.O. Box 7448 Amarillo, Tx. 79114 Tipton Children’s Home, P.O. Box 370 Tipton, Ok. 73570

Bobby Jack Weatherly, 85, passed away on Sunday, March 22, 2020, at his home South of Wheeler. Graveside Services will be held at 11:00 am Thursday, March 26, 2020 at Wheeler Cemetery with Erron Mercer and Rodney Weatherly officiating. Arrangements... View Obituary & Service Information

The family of Bobby Jack Weatherly created this Life Tributes page to make it easy to share your memories.

Send flowers to the Weatherly family.