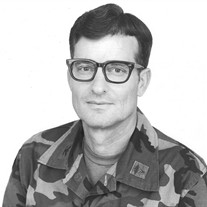 It is with great sadness that the family of Colonel Bobby King Helton announces his passing on Tuesday, February 18, 2020 at the age of 85. Services will be on Saturday, February 22, 2020, at 1PM, in the Wheeler First United Methodist Church, in Wheeler, Texas, directed by Robertson Funeral Directors of Wheeler, Texas. Interment to follow at the Gageby Cemetery in Canadian, Texas. Visitation be held at Robertson Funeral Directors in Wheeler on Friday, February 21, 2020, from 9AM-6PM. Bob was born in Canadian, Texas on September 27, 1934 to Thomas and Alice Bell Helton of Gageby, Texas. After graduating in 1953 from Wheeler High School, Bob married his high school sweetheart Lavada Jeanette Hogan. Together they moved to Lubbock Texas where Bob earned an undergraduate degree in Agriculture and a Master of Education from Texas Tech University. Following his graduation, Bob was commissioned as a 2nd Lieutenant in the US Army Medical Service Corp. During his distinguished career, Bob served two tours in Vietnam earning the Legion of Merit and two Bronze Star Medals. As a Captain, Bob obtained a Master in Hospital Administration from Baylor University in 1969. He served his country for 28 years, retiring August 31, 1987. For his second career, Bob worked as a hospital administrator with his beloved Texas Tech University. Upon his second retirement in 2001, he and Lavada relocated to Marble Falls, Texas to be near family. Bob enjoyed the outdoors and as a master gardener could often be found outside tending to his beloved roses and his garden. He was also a skilled woodworker, although he will most fondly be remembered for his unskilled results. His family will joyfully remember him as a failed pool boy and strong financial supporter of the quilting industry through his wife Lavada. Bob's true passion, however, was serving Christ. He was a Deacon at First Baptist Church Marble Falls, an active member of Gideon's International, and an avid volunteer of many charitable organizations. But nowhere was his strength as a Christian more self-evident than in his stewardship as a husband, father, grandfather, and great-grandfather. He was a warrior of God, Country, and Family. Bob is survived by his daughter Sharla Boles and husband Rodney, sons Steven and wife Stacy; Mike Helton and wife Connie; 7 grandchildren, Lauren Hepler, Jillian Boles, Jennifer Helton, Bailey Helton, Megan Helton, Jacob Helton, and Jaclyn Helton and two great grandchildren Graham and Liam Hepler. He also leaves a sister Joyce Smith and brother Jack Helton. Bob was preceded in death by his wife Lavada and brothers Thomas and Bill. Bob Helton, loving and much loved, made a difference in this world and he will be missed greatly by his family and many dear friends.

It is with great sadness that the family of Colonel Bobby King Helton announces his passing on Tuesday, February 18, 2020 at the age of 85. Services will be on Saturday, February 22, 2020, at 1PM, in the Wheeler First United Methodist Church,... View Obituary & Service Information

The family of Bobby King Helton created this Life Tributes page to make it easy to share your memories.

It is with great sadness that the family of Colonel Bobby King...

Send flowers to the Helton family.