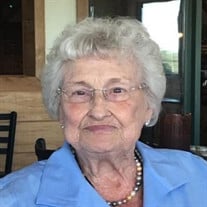 Bobbie Sue Snead, 90, of Samnorwood, Texas passed Saturday, September 25, 2021 in Shamrock, Texas. Services will be held 4:00 PM Tuesday, September 28, 2021 at First Baptist Church of Samnorwood, Texas with Pastor Lee Bevley, officiating. Burial will be in Plymouth Cemetery in Samnorwood. Arrangements are by Robertson Funeral Directors of Shamrock. Bobbie peacefully passed with her 3 daughters at her side. She was a child of God, loving wife, mother, grandmother, great grandmother, Great Great grandmother, friend, and mentor to many individuals along her walk with God. She was of solid faith and frequently shared passages with people she knew and loved. Bobbie was born to Robert and Anna Storie on July 21, 1931. She grew up in Oklahoma City, Oklahoma until marrying the love of her life, JC Snead, who lived across the alley from her. Bobbie Storie wed JC Snead on July 2, 1949. They moved to Orange County, California to pursue work for a short period of time then made several moves pursuing farming and ranching endeavors before settling in Columbus, Ohio when JC was a home builder and Bobbie was the homemaker and mother of 3 children. Bobbie and JC settled in Samnorwood, Texas in 1964 where they began a career in farming and ranching operations. She was always beside JC, supported him and raised their 3 children. She was employed by Samnorwood schools for a few years in the early 1970's before she obtained a degree in nursing from Frank Phillips College in 1976. Upon graduation, she worked at the Shamrock General Hospital until 1979 when she took a position at Wheeler Hospital where she worked until retirement in 2001. Bobbie and JC were married 57 years until JC's passing in 2007. Bobbie was a member of the First Baptist Church of Samnorwood since 1964. She loved time with her family. She was blessed with 3 daughters; 4 grandchildren; 8 great grandchildren; 3 great great grandchildren, along with a long list of relatives and friends. In summary, Bobbie Sue Snead was a Christian. She lived life to the fullest and taught us how to care and love each other. She will never be forgotten and will be in our hearts forever. Bobbie was preceded in death by her parents, Robert and Anna Storie; step father, Lawrence Harper; 2 sisters, Ruth Burgess and Lavelle Morgan; 4 brothers, Jackie Storie, Leo Lenderman, Joe Lenderman, and Richard Harper; and her husband JC Snead. Survivors include three daughters, Cecilia and Ben Anderson of Tyler, Texas, Kay and Larry Anderson of Wheeler, Texas, and Janice and Terry Thompson of Samnorwood, Texas; four grandchildren, Missy Beck and husband Marty of Elk City, OK, Tory Thompson of Magnolia, Texas, Suzann Bell and husband Donnie of Miami, Texas, and Travis Thompson and wife Lexi of Fort Worth, texas; great grandchildren and great great grandchildren, Landi White, Shelby Garza, Trevor Thompson, Mika Bell, Christina Blodgett, Jancee Thompson, Troy Thompson, Piper Thompson, Chance White, Calvin White, and Keighley White. The family asks that memorials please be made to First Baptist Church of Samnorwood or Plymouth Cemetery.

The family of Bobbie Sue Snead created this Life Tributes page to make it easy to share your memories.

Send flowers to the Snead family.