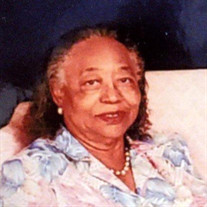 Bobbie Ruth Louis, of Clarendon was called home on Friday, September 10, 2021 in Amarillo, Texas at the age of 95. Services will be 10:00 AM Saturday, September 18, 2021 in Robertson Funeral Directors Saints' Roost Chapel in Clarendon. Burial will follow in Citizens Cemetery in Clarendon. Viewing will be held from 9:00 until service time on Saturday morning at the funeral home. Arrangements are by Robertson Funeral Directors of Clarendon. Bobbie Ruth Louis was born June 3, 1926 to Frank and Myra Duncan in the community of New Mountain, Texas. She graduated from Valley View High School in 1946. While there she was active in music, drama club, and athletics. She married her husband McKinley Louis in 1946 and was married for 53 years before his passing. Five children were born to this union. She moved to Clarendon, Texas in 1946 and was a housewife, until she attended nursing school and worked as an LVN in Claude Nursing Home, Clarendon Nursing Home, and did home nursing until she retired. She was preceded in death by her husband McKinley Louis; a son, Merle Travis Louis; and a daughter, Joyce Dianne Louis Clay; and her parents, Frank and Myra Duncan. Leaving to mourn are her sons, Odell Louis and wife Rose of Albuquerque, New Mexico, John L. Louis of Clarendon, Texas, and Charles Mavis Louis and wife Winnie of Amarillo, Texas; 13 grandchildren; 40 great grandchildren; 17 great great grandchildren; and a host of nieces and nephews.

Bobbie Ruth Louis, of Clarendon was called home on Friday, September 10, 2021 in Amarillo, Texas at the age of 95. Services will be 10:00 AM Saturday, September 18, 2021 in Robertson Funeral Directors Saints' Roost Chapel in Clarendon. Burial... View Obituary & Service Information

The family of Bobbie Ruth Louis created this Life Tributes page to make it easy to share your memories.

Send flowers to the Louis family.