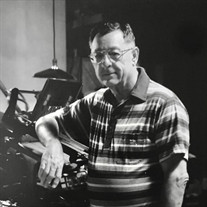 Billy Allen Combs, 84, went home to be with his lord and savior Jesus Christ on Saturday evening, April 11, 2020, in Lubbock, Texas, following a brief illness. He leaves three children: Bret Combs and wife Judy of Amarillo; Jill Sinklier and husband Cory of Abernathy; and Joey Combs of Oklahoma City; 12 grandchildren; and 2 great grandchildren. He was preceded in death by his wife of 59 years Tanya Kay (Fletcher) Combs in 2017. Born in Wellington on January 10, 1936, the son of Herschel and Helen (Dickey) Combs, he moved with his family to Memphis when he was 9. He began working for his father in the family newspaper office and print shop when he was 13. In high school he played trombone in the Cyclone marching band and was drum major his senior year. After graduating from Memphis High School in 1954, he attended Texas Tech University where he was involved in ROTC and their marching band. He and his high school sweetheart Tanya Fletcher married on August 25, 1957, at the First United Methodist Church in Memphis. He graduated from Texas Tech in 1958 with a degree in journalism and then served in the 49th Armored Division of the U.S. Army. After completing his service, the couple moved back to Memphis, where he returned to the family business becoming news and sports reporter, photographer, printer, ad salesman, editor, and eventually publisher of The Memphis Democrat. He loved his job and loved talking to all the people it brought into his life. After 55 years working in the newspaper business, he retired in 2004. Billy had several loves in his life—Jesus, his family, golf, music, the Memphis Cyclones, and telling stories. He was a lay pastor in the Methodist church, and would work hours on his messages because he wanted everyone who heard to love Jesus as much as he did. His wife Tanya was his best friend, and he was a proud father who worked hard to attend all of his children’s events. Billy was an avid golfer and a huge supporter of the Memphis Country Club. He enjoyed singing and playing his guitar, and he and his wife performed bluegrass gospel music in the Memphis, Lakeview, and Hedley Methodist churches. He followed the Cyclones for most of his life, reporting their victories, defeats, and personal stories. He also could never resist telling a story to anyone who would listen. He loved people unconditionally, and telling stories was his way of showing them that they were important to him. This friendly demeanor earned him several nicknames including “B.A.” and “Coach Combs.” Due to the COVID-19 crisis, a private graveside service will be held Thursday, April 16th. The family plans to have a celebration of life in Memphis at a future time when everyone who loved him can gather together. The family requests memorials be made to First United Methodist Church of Memphis, The Cyclone Booster Club, or Memphis Country Club. Arrangements are by Robertson Funeral Directors of Memphis.

The family of Billy Allen Combs created this Life Tributes page to make it easy to share your memories.

Billy Allen Combs, 84, went home to be with his lord and savior...

Send flowers to the Combs family.