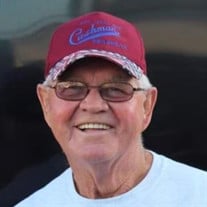 Billy Ray Beck, 79, of Shamrock, Texas passed away on December 31, 2020 at home with his loving wife by his side. Billy was born in Jay, OK on August 27, 1941 and lived in Jay until his dad went into the army. He and his mother took a train to Denver and lived there for a year. After his dad got out of the service, they moved back to Jay where Billy attended 1st grade in a one room school. When he was 7 years old, they moved to Ulysses, KS. In 1951, they moved to Erick, OK. Billy attended the rest of his schooling in Erick. In the 1960’s, Billy and his brother Larry joined the National Guard. Bill spent many years of his life as a pipeliner. He was an industry leader in the Texas Panhandle and Western Oklahoma industry. Many men learned the trade of pipeline construction under his direction. Bill was a leader and an accomplished successful pipeliner. Bill’s second love was his cattle and ranching endeavors. In 2009, he was awarded the Farmer/Rancher of the Year by the Shamrock Chamber of Commerce. Bill was a supporter of the local Jr. Livestock Association. Bill had a love for life and enjoyed antique cars, tractors, and Cushman motor scooters. He was an active member of the Texas State Cushman Club and the Oklahoma State Cushman Club. The past few years Bill was fortunate to spend many days on the golf course. He always said he was living the dream. Billy is preceded in death by his parents Cleo and Bertha Beck and his sister, Betty Blevins. Billy is survived by his loving wife of 26 years, Belinda; his son, Marty Beck and his wife Missy; his stepchildren, Chris Seay and wife Heather, Jeremy Seay and wife Kristen; 8 grandchildren and 3 great-grandchildren. He is also survived by his brother Larry and wife Tommye Beck of Pampa, TX, sister Carolyn Bradley of Pampa, TX, sister Maryoln and husband Wayne Topper of Pampa, TX, and sister Brenda Black of Colorado Springs, CO, and brother Randy Beck of Pampa, TX. The viewing will be at Robertson Funeral Directors from 1-3 pm on Sunday, January 3 and also from 9-11:30 am on Monday, January 4. There will be a graveside service January 4, 2021 at 1:00 pm at Shamrock Cemetery. In lieu of flowers contributions can be made to the Shamrock Meals on Wheels.

Billy Ray Beck, 79, of Shamrock, Texas passed away on December 31, 2020 at home with his loving wife by his side. Billy was born in Jay, OK on August 27, 1941 and lived in Jay until his dad went into the army. He and his mother took a train... View Obituary & Service Information

The family of Billy "Bill" Ray Beck created this Life Tributes page to make it easy to share your memories.

Billy Ray Beck, 79, of Shamrock, Texas passed away on December...

Send flowers to the Beck family.