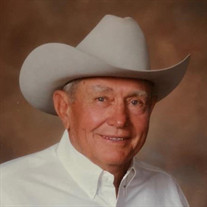 William Eugene “Bill” Craft was born in Hopkins County, TX on July 5th, 1925, the only child of Dewey and George Craft. Bill was raised on his parents’ farm in northern Hall County, TX. From an early age Bill knew he wanted to be in the cattle business; at five he was spending summers on horseback while day herding cattle along the Red River for a neighboring rancher. Bill graduated from Lakeview High School in 1943 and attended Texas Christian University where he studied business and art. He left TCU in 1946 to enter the ranching business, and aside from a brief stint as a deputy sheriff in Tahoka, TX, he continued farming and ranching for the rest of his life. Bill married Patricia Molesworth of Clarendon in 1949. The newlyweds operated ranches on the South Plains and Colorado in the 1950s, before moving to Oakes Creek Ranch near Clarendon where they raised their four children. After turning over Oakes Creek to his son Jack, Bill retired to his parents’ farm which he converted into a grazing operation. In retirement, he enjoyed breeding quarter horses and designing and building underground houses. Bill always cherished the many friends he made over the years. He was usually the life of the party, and would entertain a crowd with his colorful stories. He will be laid to rest in the family cemetery at Oakes Creek, alongside his wife and son. Bill was a member of the Texas and Southwestern Cattle Raisers Association, the American Quarter Horse Association, and the Panhandle Livestock Association. He was also a member of the Clarendon Outdoor Entertainment Association, where he served as President in the late 1960s and enjoyed judging the top ranch horse competition at the annual Clarendon rodeo. A true cattleman from his first day to his last, in 2000 he received the Foy Proctor Cowman’s Award from the Haley Memorial Library in Midland, TX, and in 2014 he received the Trailblazer Award from the Texas Ranch Roundup in Wichita Falls, TX. Bill was a lifelong member of St. John the Baptist Episcopal Church in Clarendon, where he served as a warden. He is survived by his children, Cathy Craft Keene (Jack) of San Antonio; Christine Craft Matthews (Kade) of Clarendon; Jack Craft (Lindy) of Clarendon; seven grandchildren, Katie Keene Jones (Garry) of Dubai, UAE, Polly Keene (Marc Pheulpin) of San Antonio, Margaret Matthews Frederick (Jonathan) of Canadian, Watt Matthews (Elizabeth) of San Antonio, Meredith Matthews Nicholson (Spencer) of Lefors, Charlotte Craft of Clarendon, Elizabeth Craft of Clarendon, and nine greatgrandchildren. Bill was preceded in death by his parents, his first wife Patricia Molesworth Craft, his son, William Patrick Craft, and his wife Mary Ann Sawyer-Craft. A funeral service will be held Saturday, June 26th at 2:30 p.m. at St. John the Baptist Episcopal Church in Clarendon, Texas with burial following at Oakes Creek Ranch. Memorial gifts may be made to St. John the Baptist Episcopal Church (310 S. Parks Street, Clarendon, TX 79226), the Haley Memorial Library and History Center (1805 W. Indiana Avenue, Midland, TX 79701), or the charity of your choice.

William Eugene &#8220;Bill&#8221; Craft was born in Hopkins County, TX on July 5th, 1925, the only child of Dewey and George Craft. Bill was raised on his parents&#8217; farm in northern Hall County, TX. From an early age Bill knew he wanted... View Obituary & Service Information

The family of Bill Craft created this Life Tributes page to make it easy to share your memories.

Send flowers to the Craft family.