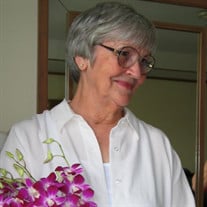 Betty Jo Hennard had a huge and loving family of blood relations, children of choice, and dear friends. Everybody thought of Betty as particularly “theirs”. Known as Grand and Grandma to her 20 grand and great-grandchildren (plus two new “greats” due this spring!), Jo or even Jobeanus to the friends and family of her youth, Betty to the cherished children of her heart who she loved and cared for as both children and adults as well as the many people in Wheeler county who were touched by her counsel and good works. Betty shared herself unstintingly with everyone that she folded into her rich life. On February 25, after a sudden illness, this wonderful, caring and giving woman peacefully passed on to what she often called “the next chapter”. Family and friends will gather to celebrate a life well lived on March 5, 2021 at 10 am at First United Methodist Church in Wheeler, Texas. The family would love for all who attend to wear red and your favorite brooch in honor of Betty, as red was her favorite color and she loved her brooches. During the service and time spent visiting, the family sincerely asks that all in attendance respect mask and social distancing guidelines. For those unable to attend, the service will be live-streamed on Facebook through the Wheeler/Allison United Methodist Church page. Considering Betty’s life of service to others, gifts to a charity in lieu of flowers would be a fitting way to honor her. Gifts for Parkinson’s research (donate online at www.michaeljfox.org) and the bone marrow and stem cell foundation Be the Match (donate at www.bethematchfoundation.org) have particular meaning for her. In Wheeler, the Meals on Wheels Program (PO Box 1125) and Toys for Tots (1309 W. Oklahoma Avenue) were dear to her heart. Born June 10, 1930 in Honey Grove to Fred and Sadie Deyhle, “Jo” lived a rural east Texas life. Any time she would go on a beach vacation she would find a shady spot, saying, “I’ve picked cotton and I never want to get in the sun again!”. Her mother and newborn twins died in 1932 and Fred remarried Eula Varina bringing in a step-brother, WJ Morris, a step-sister Reeta Ann Towle and a half-sister, Jannene Hashert. She enjoyed her high school years, graduating from Honey Grove HS in 1947 after serving as class president her junior year and as a member of a HS sorority, the Jolly Aces with her dear friends Peggy Duck and Ouida Bagley. Betty left Honey Grove after graduation, moving to Dallas where she was an au pair while attending Braughons Business College. On 9/29/1950 she married Tommie Hennard, Jr. They settled in Dallas where Betty worked for IG Gasser as comptroller of the oil well supply company. Betty moved to Honey Grove to stay with her in-laws when Tommie was called back into the navy for the Korean Conflict. Her first daughter, Mique Jo, was born there in 1952. There are dozens and dozens of photos of her infant daughter and a receipt for $4 for a lei sent from Pearl Harbor by her absent sailor husband. Upon Tommie’s discharge from the navy, the family moved to College Station where Betty Jo worked for Dean Benson of the School of Engineering while Tommie attended Texas A&M on the GI Bill, graduating from the School of Veterinary Medicine. A second daughter, Susan Kathleen (Kathy) was born in Bryan in 1955. In 1957, after Tommie’s graduation, the growing family moved to Canadian, Texas where they built the Canadian Veterinary Clinic. A third daughter, Holly Cheryl, was born on 12/26/1960. In the late 60’s Betty earned a nursing home administrator’s certificate and was the administrator at the Canadian Nursing Home. Her fourth child, and only boy (also known as her “oops”), Tommie Augusta Hennard III was born on 3/4/1969. In 1972 Betty and family moved to Wheeler, Texas and built the Wheeler Vet Clinic. Betty became an important part of the community (she was named Wheeler Chamber of Commerce Outstanding Woman of the year in 1977) and raised her family. Kathy, Holly and TA (Augie) graduated from Wheeler HS. Betty affirmed her lifetime commitment to education through the thousands of hours spent helping many kids with their homework...and raising four children who became teachers. She also served as president of Wheeler School Board from 1977 through 1990. Betty was executive assistant and court coordinator to Wheeler County Judge and District Attorney for 29 years, from 1973-2002. Betty traveled extensively: Norway, Thailand, Italy, and France. She invested her time and energy in teaching many grandchildren/great-grandchildren, acquired grandchildren how to cook (hot milk sponge cake) and how to take turns and lose gracefully in a game of Sorry. She committed herself to her family and her community. Her wisdom, wit, and humor will be sorely missed. She taught three generations that “many hands make light work” and that a positive attitude can get you through many difficult times. She jokingly said her tombstone should read: “I did the best I could.” And she did. She will be greatly missed by many, many people. Betty was preceded in death by: husband TA Hennard Jr, daughter Mique Jo Allison, Mike Newland, Kimberly Newland, Nathaniel Hillhouse, Hal Maddoux, Doyle Ramsey. She left behind—3 children and their spouses: Kathy Maddoux of Burleson, Holly (Tim) Bibens of Northville, NY, TA (Bec) Hennard of Jakarta, Indonesia. Grandchildren and spouses: Jessica (Greg) Keller of Mendota Heights, MN, Rebecca (Chad) Duncan of Van Alstyne, Tx, Blake (Rebecca) Maddoux of Midland, Elyse (Daniel) Habenicht of Grapevine, Marissa (Griffin) Dickerson of Chula Vista, CA, Hannah Bibens of FW, Cameron Bibens of Joshua, Ross Hennard of Jakarta, Indonesia and Xiaolin Hennard also of Jakarta. Great grandchildren: (11) Jacob and Alli Weinzettel of Mendota Heights, MN, Bryleigh and Jackson Duncan of Van Alstyne, Weston, Hallie, and Emma Maddoux of Midland, Madeline, Philip, and Abigail Habenicht of Grapevine and Alan Dickerson of Chula Vista. Betty was excitedly awaiting the arrival of two more great-grandchildren this spring...baby Maddoux and baby Dickerson. Cremation & Arrangements are by Robertson Funeral Directors of Wheeler, Texas.

Betty Jo Hennard had a huge and loving family of blood relations, children of choice, and dear friends. Everybody thought of Betty as particularly &#8220;theirs&#8221;. Known as Grand and Grandma to her 20 grand and great-grandchildren (plus... View Obituary & Service Information

The family of Betty Jo Hennard created this Life Tributes page to make it easy to share your memories.

Betty Jo Hennard had a huge and loving family of blood relations,...

Send flowers to the Hennard family.