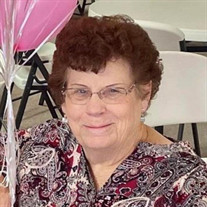 Anita Lois Amerson Knoll was born in Wellington, Texas on September 29th, 1939 to Carl T. and Vera E. Amerson of Dozier, Texas. She passed away peacefully on Sunday, March 27th, 2022 at the age of 82. Throughout Lois’s school years, she was very involved in all school activities. Some of her awards, honors and activities included FHA 4yrs, Basketball 4yrs, 4-H 7yrs, Glee Club 2yrs, FFA Sweetheart, 4-H Pres. 2yrs, 4-H Gold Star Award, Who’s Who, Most Athletic and many more. Her favorite part of school most desired accomplishment was performing her abilities on the basketball court, including that “Famous Hook Shot!” In 1957 Lois Graduated from Samnorwood High School, where she would then go on to West Texas State University in Canyon, Texas to pursue business classes for 2 years. During this time, she married her High School Sweetheart, Joe Frank Knoll, Sr., on August 22, 1959 in Dozier, Texas at the Church of Christ. As they began their lives together, they first lived in Canyon, Texas where they began expanding their family with two sons, Jody and Steven. After a few years Joe’s job transferred them to Oklahoma, where they lived in Del City, Muskogee and Midwest City over the course of 3-4 years. They then decided to move back to the family farm/ranch near Greasy Corner Junction of Collingsworth County to add a daughter, Stacey to their family. While Lois’s most loved job was being a Homemaker, Wife, Mother, Aunt, Cousin, “Granny” and Cattlewoman, she also worked at the Lutie Cotton Gin (Lutie, Tx), Collingsworth County Hospital Business Office (Wellington, Tx), Shamrock Texan Newspaper, The Irish Star-News, County Star-News & Buy 4 Less (Shamrock, Tx). Lois did so love her family, especially family gatherings which typically meant 5 to 15 children running in and out of the house and 2 to 5 women preparing a great meal, which included lots of laughter, tears, hugs & genuine family love. On September 18, 1999, Lois lost the love of her life, Joe Frank, after 40 years of Love & Marriage. Once her grandchildren became active in school, she would then be making lots of trips to watch school activities and her favorite, basketball games. Lois was a life long Member of the Dozier Church of Christ until they decided to close its doors in 2015. She then joined the Wheeler Area - Church of Christ, which shared lots of ministry with Dozier and lifelong friends since her childhood. Lois was also a member of various clubs, however there is one that has been her extended Love, Family & Sisterhood, The Young Matrons Club of Samnorwood. These women have had a special love & bond throughout the 25+ years. She will forever be bonded to Her Special Sisters! The family would like to acknowledge Hereford Nursing & Rehab and Samaritan Hospice, both of Hereford, Texas, for their staff going above and beyond with love, compassion and care for Lois during her recent time with them. Lois passed peacefully in Hereford, Texas on Sunday, March 27, 2022 at 12:36 am. Lois was preceded in death by her Parents, Carl T. Amerson (1973) and Vera E. Breeding Amerson (2001), a Granddaughter, Cassie Ann Knoll (1992) and Her Husband of 40 years, Joe Frank Knoll (1999) and recently Her Sister, Juanita Joyce Amerson Williams (01/10/2022). Lois is survived by: Her brother, Don C. Amerson and wife Donna of Alvin, Texas; Two sons, Joe F. “Jody” Knoll, Jr. and wife Machelle of Canyon, Texas & Steve A. Knoll and wife Laura of Hereford, Texas; Daughter, Stacey Renea’ Knoll of Shamrock, Texas; Grandchildren, Jarron Knoll and wife Lauren of Plano, Texas; Ashlynn Knoll of Denver, Colorado; Wesley Knoll of Hereford, Texas; Drayton Morgan of Shamrock, Texas; Destry Morgan of Lubbock, Texas; Joe Karl Knoll of Myakka City, Florida; Anita Knoll & Marie Knoll both of Canyon, Texas; Great-Grandchildren Declan, Amelia & Tristan of Plano, Texas; & Multiple nieces and nephews, and lots of Breeding, Amerson & Knoll cousins. In leu of gifts, we would like donations made to The Dozier Cemetery. - Dozier Cemetery, 15767 FM 1036, Shamrock, TX 79079 Visitation – Friday, April 1, 2022 at Robertson Funeral Directors - All day, family will receive friends for visitation from 5-7 pm Friday evening - 311 N. Wall St., Shamrock, Texas 79079 Funeral Services – 2 pm Saturday at Wheeler Area Church of Christ - Meal provided for family at 12pm at the church prior to sevice - 1500 S. Alan Bean Blvd, Wheeler, Texas 79096 (next to Baymont) Burial – Shamrock Cemetery following services - East on Railroad Avenue about 1 mile out of city limits, Shamrock, Texas

Anita Lois Amerson Knoll was born in Wellington, Texas on September 29th, 1939 to Carl T. and Vera E. Amerson of Dozier, Texas. She passed away peacefully on Sunday, March 27th, 2022 at the age of 82. Throughout Lois&#8217;s school years,... View Obituary & Service Information

The family of Anita Lois Knoll created this Life Tributes page to make it easy to share your memories.

Send flowers to the Knoll family.